My connection to Drepung comes through my husband Kalsang, who was a monk there until he left in 1959. In the late 70’s I also became acquainted with many monks, lamas  and former monks from Drepung, who were part of our circle of friends. From Locho Rinpoche, who passed away three years ago, I heard the story behind the construction of the new Loseling Hall. In the 1920’s the Loseling College bursars decided that a new hall was needed and the celebrated Gen Locho, Locho Rinpoche’s former incarnation, a Geshe from Drepung with an imposing countenance and a prodigious memory was appointed to the task of raising the funds. Gen Locho travelled to Mongolia and though he had few connections there, in time became famous for his ability to recite the Kangyur by heart and received offerings of gold rubles that filled a trunk towards the building of the new Hall. The communist army was closing in on Mongolia and he had to make a run back to Tibet, where he delivered the funds. The new hall was build and was a source of great pride.

Kalsang was a Chunsel in Nyare Khamtsen, a rank sponsored by the monk’s family, that gave him status equal to that of a lama. He had his own rooms, an attendant who made sure he was properly attired and focused on his studies. Kalsang loved to debate, and I heard detailed descriptions of the chora, the tree shaded debating ground situated across the alley from the main Nyare Khamtsen area. Each monk I knew had his own vividly told story of life at Drepung, and I pictured them walking up and down the narrow alleys, their long cotton wrapped books bouncing over their shoulders.

In the 80’s many of the monks and lamas returned and visited Drepung. Their reaction was that it was ‘so small’, so much so than the size the monastery took up in their memory, when it was filled with monks and bustling with activity. One lama told me that it was actually much bigger but that the lack of merit had shrunk it. I doubted that, but remained politely silent.

Last year, in November, I went to Drepung for the first time. We began our visit with the celebrated Ganden Podrang, the seat of Spiritual and Temporal Power and the residence of the 5th Dalai Lama before he moved to the Potala, then in construction. The place was crammed with pilgrims, most carrying bottles and thermoses full of margul or melted butter to offer to the many, enormous butter lamps in the different chapels. When passing through the 5th Dalai Lama’s chambers, I remembered a story Gyeten Namgyal, who had served under the 13th Dalai Lama and later become Master of Robes or Namsa Chenmo, had told me. Sometime in the 30’s, he had been called to the Ganden Podrang to renovate the quarters of the Great 5th. It was a simple monk’s room, and his possessions were stored in trunks, which were all opened and inspected. Namsa Chenmo was surprised to see that all his garments were made of shenma, or Tibetan woolen cloth, without a hint of brocade. I then asked to be shown to Nyare Khamtsen. Our daughters Sochoe and Dechen had visited in 2002 and brought back pictures of the main courtyard and Kalsang had identified one of the doors as being that of his room. It was easy to find, but the main hall was locked, with a note and telephone number pinned to the door. We tried to call, but the number didn’t go through. No one seemed to have the key.  The chora, which was right behind, was also locked, but we could peer over the wall at the deserted debating grounds, shaded by trees.

We then moved on to the Loseling Great Hall, which was empty of pilgrims. It was well kept, with the running mats ready to receive monks. The murals were darkened as if by soot and though they couldn’t have been older than 90 years, the age of the building, they bore the brunt of the constant burning of butter lamps that left a layer of dark grease over the walls and ceiling. I noticed that older temples had murals in styles no older than the 18th century and concluded that repainting them when the walls went black was standard procedure, with major renovations or just patch ups by area every 200 years or so. Only in Gyantse, in the tiny chapels of the celebrated stupa did I see original 15th century murals, which were of a very different style.

The entrance to the Ganden Podrang, former residence of the Fifth Dalai Lama 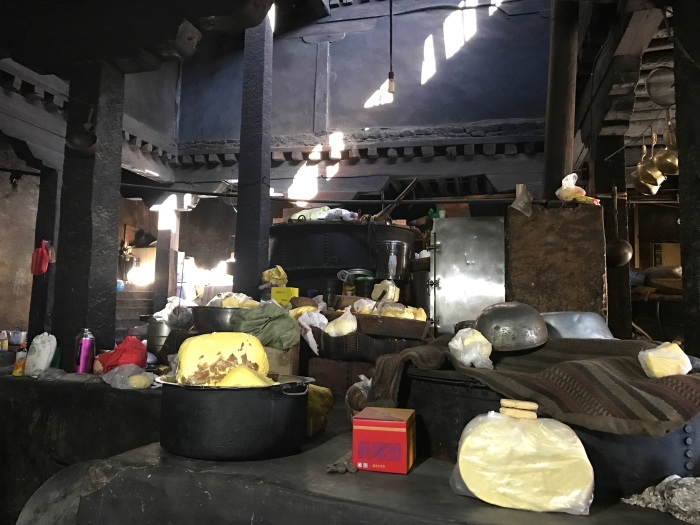 The Loseling main hall did strike me as ‘small’, though it was probably much bigger and grander than the one it replaced some 9 decades ago. I began to understand what the lama meant about ‘shrinking’; it wasn’t a physical reduction that had occurred, but the heart of the place, which pulsed for over 500 years with the philosophical and religious discussions and debates that animated the courtyards of every House, prayers, ritual and religious music that filled the halls, kitchens bursting with activity, that had come to a near standstill. Drepung’s grandeur lay in its power as a receptacle of knowledge and the fame of its scholars, who came there to study from every corner of Tibet, and not in its architectural merits. Drepung was a center of activity, and building was done over the centuries as need arose, whitewashed specks visible from a distance, spreading over the south facing hill it was built on, soon resembling a ‘mound of rice’ -the meaning of its name in Tibetan.