Every morning before dawn, when I open the metal blind to let out Chichi our Chihuahua, I would find, rain or shine, Traga, our black dog, sitting on the patio waiting for the special meal Jamphel la would bring him later. Two days ago, I found the patio empty. He was seen the night before but was nowhere to be found.

One evening in the spring of 2004, we hear a puppy squealing somewhere beyond our garden. This was not uncommon, as most dogs in our area are only loosely or not at all affiliated to owners and lead their own lives. Puppies are abandoned, or dumped by their owners or just wander off. The screams persisted until we decided to investigate. My children returned with a tiny black puppy, who seemed blind and couldn’t stand on its legs. We kept him and nursed him back to life, resigned at the thought of having another puppy dyeing on us or a disabled dog. He did nothing of the sort. His legs seem to unfold, and one day, he could stand, then walk. His sight seemed no problem at all. He grew into a handsome, eccentric dog who never allowed anyone to touch him and lived fourteen years. 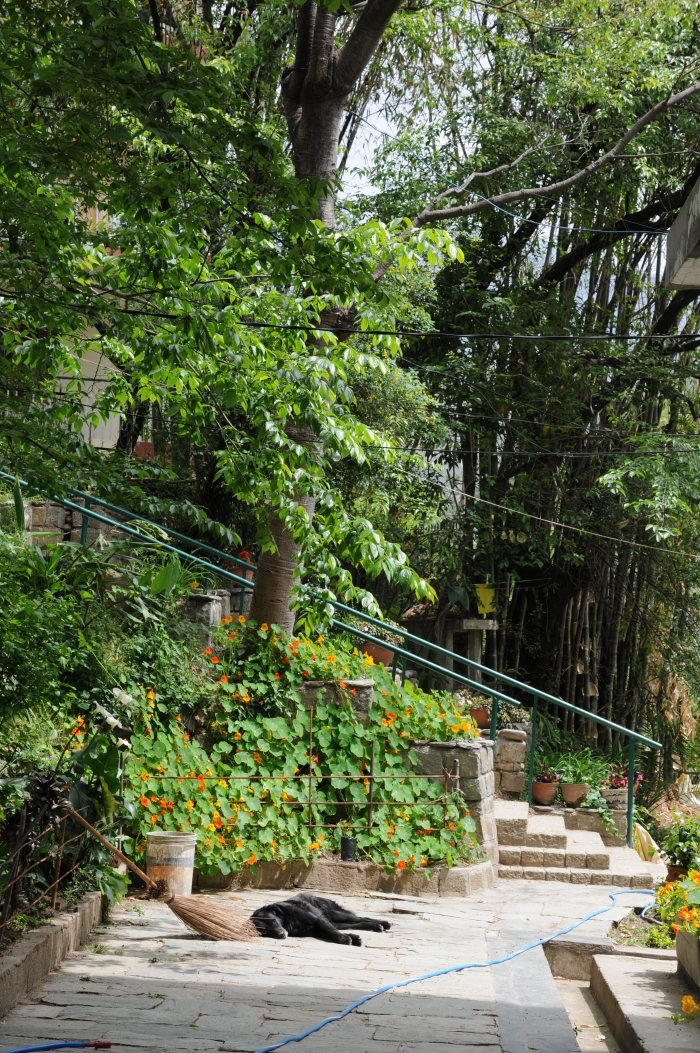 Other dogs came and went but Traga was with us a record stretch. There are so many ways in semi-rural India for a dog’s life to be cut short. Most of our small ones were taken away at night by leopards and civets. Others died of diseases, some wandered off and were poisoned in anti-rabies drives lead by the town council. Others were trucked away by our neighbor, the Tibetan Medical Institute, who got tired of their large population of their semi-independent dogs (and those of their neighbors) and dumped them in a wooded area some 30 kilometers off. Some made their way back, but we went looking for ours and found most of them. Traga hardly ventured beyond the gate and stayed safe. When disease killed  our dogs in 2011, only he and our Chihuahua survived.

Traga got along with all the other dogs; Chichi the Chihuahua, Sangpo the St Bernard, Pishi the mongrel and Daisy, Sochoe’s much loved wannabe German Shepherd, then Luna, her Shiatzu. His relationship with humans complicated and the most we ever got to touch of him was the tip of his nose. Visitors sometimes complained of being nipped and he had the strange habit of pooping in each and every one of the flower pots that line our patio. Jamphel la accused Daisy, whom he thought to be over loved for ‘who she was’, but we knew it wasn’t Daisy. Still, it would take sophisticated acrobatics to aim that well and so often, so Sochoe stayed on the lookout and actually saw him pull it off.

About 3 years ago, Traga began to lose his strength and drag his paw. He didn’t always get his food, so Sochoe began to feed him separately and Jamphel la gave him a mat to sleep on. This winter was cold, and his mat was often taken over by the other dogs, so Sochoe decided to give him his own doghouse, just outside her door. Jamphel la began to feel competitive and said he wouldn’t sleep in it, but after two days of foul weather, we found him tucked in. Jamphel la said he needed a light and drilled a hole into the roof of the doghouse and installed a bulb.

We have no idea where he went, but semi free dogs are known to go away to die. Lately, he had found a way, following Sangpo the St Bernard, to squeeze out and do little rounds outside. He must have slipped beyond the gate at night, after he was seen last. ‘ A good dog goes off to die’ they say around here.

Traga was aloof, he didn’t photobomb group pictures or cuddle up to anyone so putting this piece together, I realized how few photos we had of him.