How did children play in my time, in the time of my parents? They played outside with other children, climbed trees, played hopscotch, marbles and jump rope on a dusty playground, invented situations like going to a party, borrowing their mother’s dresses and shoes and smearing on makeup or running a store or a kitchen using play cups, kitchen utensils flowers, leaves and mud which we smashed into suspicious looking brews that we tried to feed to adults. At home, they may have a few toys, dolls for girls, cars for boys, board games, a bicycle or a good set of marbles or a Lego.

I loved buying toys for my children, especially since there were none where we lived and they were part of the excitement of opening a suitcase full of treasures when returning from a trip from Europe, East Asia or the US. Over the years, I noticed that the excitement often stopped there; the toys were unpacked and marveled at, often ending up in a pile in their room, bits lost and scattered, often the prey to rats or puppies. Dolls, cars and logos kept them busy inside in the evenings, but real fun was outside, playing with their friends and pets the same way we played as children.

The same goes for my grandchildren. They have toys, all in piles in their room. They play outside with other children, running up and down the hills in Ritoma in little packs, taking over a stone pile and fighting with dung, or settling somewhere and setting up a house, store or kitchen, building a little fire, using stones and bits of toys  they collect here for furnish the space or their imagination. Young dogs or a pet sheep will hand around for the company.  A cardboard box becomes a house, the mud in the creek, leaves and flowers become food they eat or prepare. Norzin, with her innate sense of enterprise, collects pretty stones from the river and ‘sells’ them to visitors.

Inside, Baby D will pick from the toy pile, add objects gathered around the house and pack shopping bags that she will walk around with, then stash somewhere. If a piece of something goes missing, we know it is in Baby D’s stash. Norzin and her dress up sometimes very creatively and smear makeup on their faces, or dress up the kittens, or both. Toys are mere accessories to be added to all kinds of other objects collected in the house or pasture.

Some say that the way children played for hundreds of years is threatened by the world of television, phones, computer games and IPads and it is certain that these mark the new wave of entertainment for children. They may keep children indoors and ‘safer’ though their remoteness from the real world and nature bring on a different kind of danger, one still very much unkown. I am grateful that I can still see my grandchildren play the way I always knew how to play. 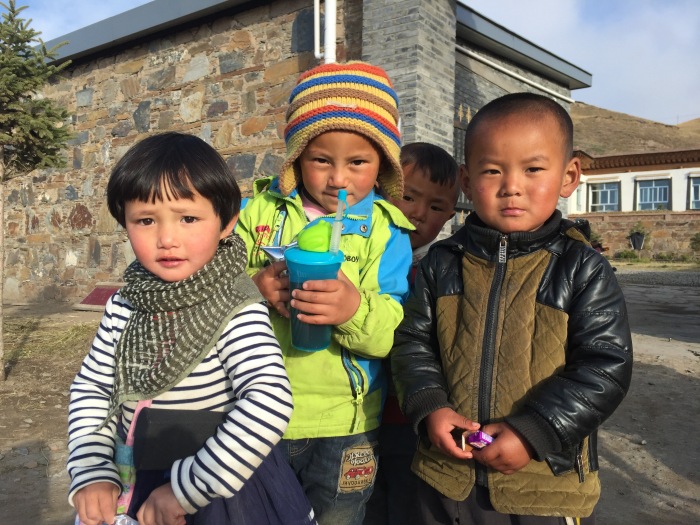 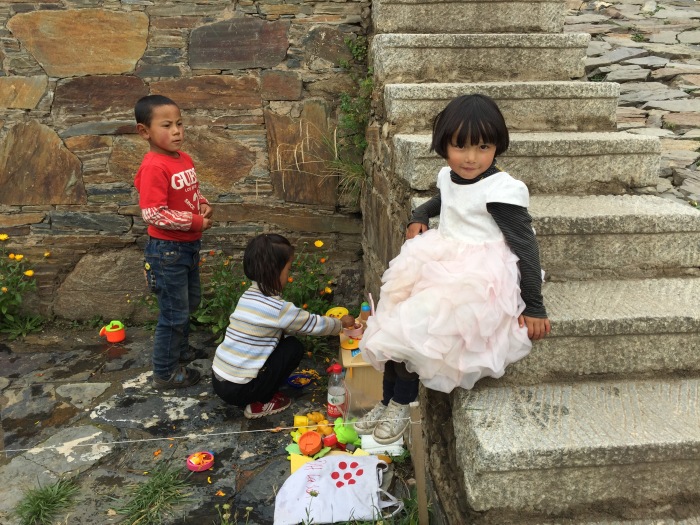